*Horror/Mystery 1960-1980s: One of the most startling success stories in the back issue world is the ever-spiralling popularity of Moon Knight’s premier appearance. The series Werewolf By Night had been toddling along, chronicling the adventures of young lycanthrope Jack Russell (no, really), when the boat was suddenly rocked in WBN #32 by a vigilante whose only goal seemed to be the annihilation of our hero – and his silver armour and weapons seemed likely to achieve it! The man who would later be revealed as Marc Spector had a deeper back story, of course, and in his multitudinous appearances since, has developed a complex background oscillating between ‘Marvel’s Batman’ and ‘Multiple Personality psychotic possessed by Egyptian Gods’. Be that as it may, he remains hugely popular, and a near-future Moon Knight TV series having been recently confirmed, demand for his debut is intensifying. Our latest WBN #32 is a lovely high grade pence copy; trying to be picky, it has a couple of very, very slight spine ticks and a tiny ‘nick’ at the bottom right cover corner; tight, flat, glossy and vibrant with firmly attached staples and white pages — virtually as good as it was when first published in 1975 (gosh, 45 years ago!). The #33 (2nd Moon Knight) is in virtually identical shape, with just a minor extra dink at the top of the spine. High resolution images of #32 are available on request.
PICTURED: WEREWOLF BY NIGHT
#32 VF+ p £1,075 (plus back and splash)
#33 VF p £100 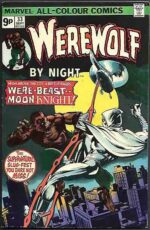