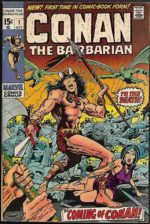 *Marvel: In 1970, Marvel tried something risky and different, quite aside from their familiar super-hero stable; at the urging of writer Roy Thomas, they put out a sword & sorcery title adapting the Robert E. Howard stories of Conan the Barbarian, and, bucking the trend, it was a smash hit – thanks in no small part to the illustration of Barry (not-yet-Windsor) Smith, a talented young British artist who gave the most famous Cimmerian of all grace and feral power, filling Conan’s world with mystery, menace and beauty as monsters and maidens competed for our hero’s attentions. Another fantasy comics star made her debut in Conan #23 (Feb 1973), when Conan encountered Red Sonja, a female brigand and adventurer who was every bit his equal – even though Marvel missed a step by not cover-featuring her! Sonja rapidly caught the public’s imagination and spun off into her own series. More than four decades later, both continue their comic book careers today, Conan back in the Bullpen after a long sojourn at Dark Horse, and Sonja currently published by Dynamite Comics. Our newest Conan #1 is a FN cents copy, vivid unbroken cover colour, superior interior pages, and only very minor wear at spine and corners, not affecting the cover image. Conan #23 is a FN/VF pence copy, with light creasing at upper and lower right cover corners.
PICTURED: CONAN
#1 FN £150
#23 FN/VF p £55