*Marvel: Another early Lee/Ditko classic Spidey new in, with the debut of Kraven the Hunter. Sergei Kravinoff, scion of exiled Russian nobility and the self-determined ‘Greatest Hunter in the World’, set out to entrap Spider-Man to, basically, big up his own reputation, and that slender premise has been parlayed into a surprisingly long career culminating in several major stories, most notoriously 1987’s ‘Kraven’s Last Hunt’. Originally just a highly trained and skilled human, Kraven has been retconned as having enhanced strength and longevity to make him more of a match for the super-set, and his moral ambiguity has led to him crossing the line between hero and villain many times – most recently, for example, he was a heroic member of Squirrel Girl’s supporting cast! Rumours of a Kraven media adaptation persist, so interest in this issue has spiked of late. This copy of Kraven’s debut is a lovely FN+, with deep unbroken background colour, tight pages and corners, and off-white, flexible interior pages. High resolution images are available on request.
PICTURED: AMAZING SPIDER-MAN #15 FN+ p £800 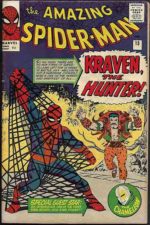 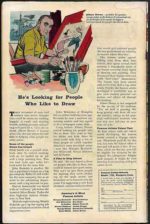