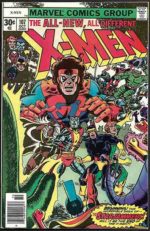 *Marvel: Two science-fiction based super-teams long associated with the X-Men are the Imperial Guard and the Starjammers, and both, oddly, were the result of artist Dave Cockrum’s impatience. Cockrum had illustrated a critically acclaimed and successful run of DC’s Legion of Super-heroes, but following altercations with editor Murray Boltinoff, Cockrum quit the Legion and DC to co-create the ‘New’ X-Men. By way of cocking a snook at DC, Dave came up with a suspiciously similar team of alien super-heroes, the Imperial Guard, each one of which was a (just barely) non-litigious clone of a Legionnaire. Similarly, the Starjammers had been created by Cockrum for a solo tryout in Marvel Premiere or Marvel Spotlight, but on being told those books’ schedules were filled years in advance, Cockrum offered the band of space pirates to X-Men scripter Chris Claremont, who bolted on a retconned relationship to an X-Man and threw them into the mix. This issue saw the first full appearance of both teams (the Starjammers having done the ‘enigmatic cameo’ bit since #104), taking the cast list – never forgetting our mutant heroes – to around 50, for a full-on free-for-all! This copy of X-Men #107 is an outstanding NM, cents (no UK copies exists, as the issue was not distributed here).
PICTURED: X-MEN #107 NM £275