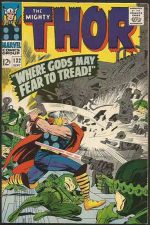 *Marvel: This triple-threat for Thor saw him fighting the menace of Tana Nile and the Colonisers of Rigel, an alien race who were expanding ever outwards into the galaxy – and planned to make Earth their next housing project, whether the Thunder God liked it or not! Tana had been ‘teased’ as Jane Foster’s enigmatic room-mate since #129, but these were the issues in which she revealed her true form and agenda – and, along the way in this cosmic drama, we were introduced to two more popular and well-loved characters: Ego the Living Planet (later played by Kurt Russell in the Guardians of the Galaxy movies) and the Recorder (Recorder 211, to give him his full name). All three parts now back in stock, with the main event, #132, in an outstanding FN/VF.
PICTURED: THOR #132 FN/VF £55