*Marvel: Following his 1976 return to Marvel, the legendary Jack Kirby was anxious not to get trapped in the cycle of just illustrating super-heroes again, and one of his conditions was that he would be allowed to write and draw his own concepts. How much of the Eternals concept was his is, politely, open to debate; reminiscent of the then-popular Erich Von Daniken paperbacks, which asserted that mankind’s historical ‘Gods’ were alien visitors, Kirby’s Eternals postulated the return of ancient immortal extraterrestrials and the cataclysmic repercussions for humanity. Originally intended to stand apart from the Marvel Universe, it was shoehorned in at editorial insistence, which resulted in Kirby eventually abandoning the strip mid-story, but with the Eternals movie this series has gathered a lot of interest. This update, we have the first three issues of the series, plus many more as follows (many others available already listed in our catalogue):
IN THIS UPDATE: ETERNALS
#1 VG- p £80 (PICTURED) Decent copy with sharp corners, nice off-white pages, and a rich colour cover apart from some signs of wear in the centre towards the bottom and a long colour-breaking crease vertical from the bottom edge to the centre.
#2 VG/FN £44 (PICTURED) Decent mid-grade copy, glossy and flat, with a label removal discolouration spot over the logo and some non-colour breaking edge wear.
#3 VF- p £40 (PICTURED) Nice copy with just minor reading wear at spine and a rear cover dink at base of spine. 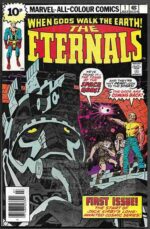 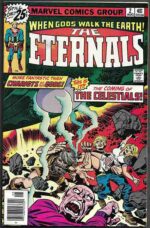