*Marvel: [Back in February, we originally listed this post, but owing to a technical error, the corresponding comics were not added to our catalogue listing. That’s now been fixed, so here is the post again!] 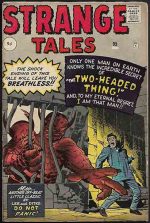 “We’re always happy to see giant panty-wearing monsters” is a phrase one seldom expects to hear, but it’s certainly true here at 30th Century, as the pre-hero Marvel anthologies – usually featuring at least one enormous critter in a giant gusset bent on world domination – are spiralling ever upward in popularity and collectability. We have new entries for Journey Into Mystery (#78, a rare non-BPM issue starring a ‘Dr.Strange prototype’), Strange Tales (#95 with “The Two-Headed Thing” VG+ p £52, pictured) Tales to Astonish (#33, “Dead Storage”), and a selection of Tales of Suspense starring Monsterollo, the Creature From the Black Bog and Elektro, who graces the cover of TOS #13 right (VG+ p £70).”