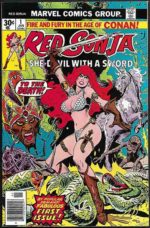 *Marvel: Following her guest appearances in Conan the Barbarian, demand for a Red Sonja solo series mounted, and after a trial run in Marvel feature (second series) the ‘revised’ version as redesigned by Frank Thorne gained her own series in 1977, notorious chain-mail bikini and all. Despite the skimpier clothing, Thorne’s Sonja was often more scary than sexy, as Thorne drew her with intense expressions that bordered on the deranged, for a very mixed message indeed. We have the entire 15 issue series from 1977-1979 newly in stock, averaging VF/NM, all cents copies.
PICTURED: RED SONJA #1 (1977) NM £50 SOLD