*Marvel: To celebrate Women’s History Month, this week’s ‘Six of the Best’ focuses on the heroic ladies of the Marvel Universe. Claws of the Cat #1 brings us Greer Grant Nelson, pioneer feminist super-heroine in her origin story by Linda Fite, with superb artwork by Marie Severin and Wally Wood – later, Greer returned to the MU as Tigra the Were-Woman. Disco Diva the Dazzler, a surprise hit generated from a failed cross-marketing scheme with a record company, became a member of the X-Men and has surpassed her rather dodgy origin to become a much-loved character. Red Sonja, She-Devil With A Sword, spun out of Conan the Barbarian’s series to solo stardom under the controversial aegis of Frank Thorne. Shanna the She-Devil, an environmentally-conscious attempt to modernise the ‘Jungle Queen’ genre, premiered in 1972 with a stunning Jim Steranko cover – though not a hit originally, Shanna remained prominent thanks to her marriage to Ka-Zar. Sensational She-Hulk #1 was Jennifer Walters’ second time around as a solo act, and it was her best run, written and drawn by John Byrne with genre-busting wit and charm. And finally, Jessica Drew, the original and still the best Spider-Woman, won her own series after her copyright-protecting one-shot in Marvel Spotlight #32 proved to be a breakout hit, launching a series that was for most of its run genuinely inventive and occasionally disturbing.
PICTURED:
DAZZLER #1 VF/NM £19
SHANNA THE SHE-DEVIL #1 VG+ £15
SPIDER-WOMAN #1 VF £35 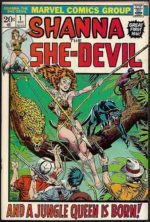 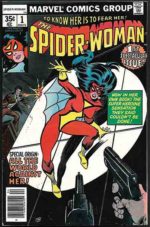