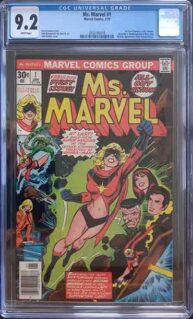 *Marvel: In Ms Marvel #1, spinning out of Captain Marvel, former background character Carol Danvers got her own set of super-powers and a whole new supporting cast (including new boss J. Jonah Jameson) as she attempted to discover the mystery behind her own origins. Although moderately successful, the series was attacked by critics who derided Carol’s derivative costume, which made her look like Captain Marvel’s sidekick, and the fact that Marvel were offering a ‘powerful, confident’ heroine who suffered from blackouts and amnesia. Despite these jibes, Ms Marvel has been a prominent member of the Marvel Universe for nearly forty years in one guise or another – whether as Ms Marvel, Binary, Warbird, or most recently the latest Captain Marvel, her chequered history has provided many intriguing plotlines. With the Captain Marvel movie, starring Carol Danvers, being a blockbuster hit worldwide, early appearances of the character have heated up. This is a CGC 9.2 (NM-) cents copy, unrestored universal blue label, with white pages and a case in perfect condition.
PICTURED: MS MARVEL #1 CGC 9.2 NM- £170