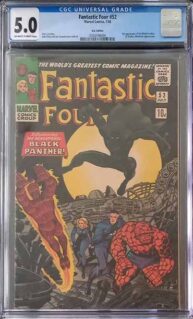 *Marvel: Lee & Kirby’s Fantastic Four added to its many innovations in 1966’s FF #52, when they introduced the first black super-hero in comics. Previously, the vanishingly rare heroic black characters in comics had been either embarrassing sidekicks or ‘noble savages’, but the Black Panther was the monarch of a highly sophisticated and technologically advanced African nation, Wakanda, and was to become not only one of the FF’s greatest allies, but a mainstay of their fellow heroes, the Avengers. Following his spectacular big-screen success, T’Challa’s earliest appearances have never been in higher demand, and following Marvel’s recent announcement that there will be no more Black Panther in the MCU, since the character will not be recast after the death of Chadwick Boseman, he now holds a unique place in Marvel movie history. Our latest copy is CGC 5.0, unrestored blue label, a pence printed copy, off-white to white pages and a totally undamaged case.
PICTURED: FANTASTIC FOUR #52 CGC 5.0 VG/FN p £1000