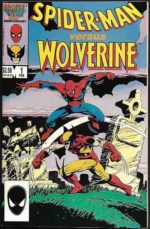 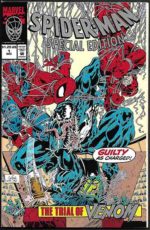 *Marvel: Two stand-alone specials starring Peter Parker and guests. From 1987, the Jim Owlsey/Mark Bright/Al Williamson Spider-Man Vs. Wolverine, a 64-page one-shot pitting our heroes against the Yakuza, and caused some controversy at the time because Spidey actually exercised lethal force against the villains. 1992’s one-off, Spider-Man Special Edition: The Trial of Venom, was a limited release which could only be obtained, at the time, by making a charitable donation to UNICEF. By Peter David and Jim Craig, the one-shot co-stars Daredevil, and comes with a poster bound in. Although the print run is uncertain, very few copies are now in circulation, and this one comes with the still firmly secured poster.
PICTURED:
SPIDER-MAN VS WOLVERINE NM £30
SPIDER-MAN SPECIAL EDITION #1 NM £35