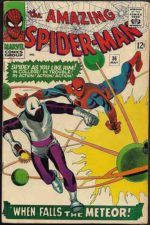 *Marvel: As we’ve often averred, sterling work by other artists notwithstanding, Steve Ditko is the one true Spider-Man illustrator, and we’re chuffed to welcome four Lee/Ditko issues from Spidey’s early years. We open with #16, Daredevil’s first guest-appearance outside his own title, as he and Spidey team-up against the Ringmaster and the Circus of Crime; issue #25 brings us the first iteration of the Spider-Slayer, masterminded by the ever-jolly J. Jonah Jameson; #31 sees the double debut of two characters destined to become instrumental in Spidey’s life – for very different reasons – Gwen Stacy and Harry Osborn and #36 is an action-packed epic as Ol’ Web-Head faces off against the debut of the malevolent Meteor Man (later the Looter).
PICTURED: AMAZING SPIDER-MAN
#31 GD £60
#36 FN- £80