*Marvel: By his 101st issue, Spider-Man had become temporarily encumbered with six arms, leaving him a true eight-limbed arachnoid hero; but more importantly, he met a foe who was destined to become one of the Marvel Universe’s prime anti-heroes. Following the 1971 relaxation of the Comics Code Authority (which had hitherto banned mention of vampires and werewolves in the wake of the 1950s horror comics scare), the floodgates were opened for all manner of supernatural beings; one of the first was Michael Morbius, tragic scientist who, while not a traditional vampire, gained many vampiric attributes after an experiment gone awry. Among said attributes: enhanced strength, speed, senses… and an uncontrollable craving for human blood. A big hit with the Spider-Man audience, Morbius the Living Vampire made a rapid reappearance in Marvel Team-Up #3, graduating to his own series in Fear thereafter. There have been several Morbius series in the intervening decades, and the trailers for the Morbius flick are out on the web as I write, leading to a heightened demand for his premier appearance. This is a beautiful pence priced copy, unmarked, glossy, supple, tight and flat with firmly attached staples, sharp corners and just a hint of edge wear, but virtually nothing. A high grade copy of a landmark issue. High resolution images are available on request.
PICTURED: AMAZING SPIDER-MAN #101 VF p £525 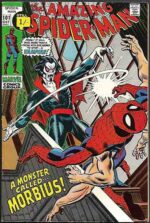