*Marvel: One of the later breakout characters of Marvel, Frank Castle, aka bereaved urban vigilante the Punisher, became one of the company’s super-stars in the 1990s, but had spent most of the previous two decades ‘bubbling under’ as a guest-starring anti-hero. His media presence – and commercial appeal – has been heightened by numerous film and TV appearances. The Punisher’s first appearance in Amazing Spider-Man #129, February 1974, is particularly rare in the UK, where, owing to the presence of Spider-Man Comics Weekly, the US title was embargoed for distribution for several years. This is a cents copy (there are no pence copies, of course), tight and flat with cover gloss, without marks, creases or handling wear. Excellent page quality with just the tiniest bit of corner blunting. We’ve graded it down because there’s about 5 mm of white spine showing (see scan), where the cover has been printed slightly to the right of centre; some people find this an off-putting defect, although others don’t mind. It should be noted that the staples are centred exactly where they should be at the edge of the spine and are firmly attached at spine and centrefold, so the comic opens exactly as it should. As such, this represents a chance to get an otherwise high grade copy of a key issue on which prices are consistently rising. High resolution images are available on request.
PICTURED: AMAZING SPIDER-MAN #129 FN/VF £775 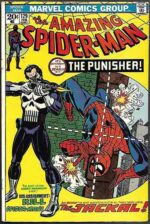