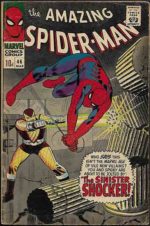 *Marvel: A Lee/Romita co-creation, the Shocker – a.k.a. Herman Schultz, career criminal and part-time scientist – created a special insulated suit which generated electrical waves that could open safes and incapacitate the police. Outsmarted by Spider-Man on their first clash, he has returned many times to battle the Web-Slinger and many other Marvel heroes, making his big screen debut in ‘Spider-Man Homecoming’ in 2017. This first appearance is a VG, with light to moderate edge wear, fine corner creasing, and slight age-related discolouration at the rear spine, but staples firm at cover and centrefold.
PICTURED: AMAZING SPIDER-MAN #46 VG p £65 SOLD