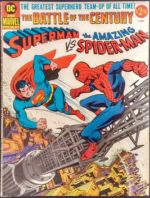 *DC/Marvel: In 1976, after some delicate negotiations, the two major publishers decided to pool their talents and create a team-up between their two iconic characters which proved too big for a regular-sized comic – so the tabloid-sized format, as seen in Marvel’s Treasury Editions and DC’s Limited Collectors’ Editions, was co-opted for this epic event! While Wizard of Oz is technically the first Marvel/DC co-production, that’s really just DC piggybacking onto a project Marvel had already produced, to avoid litigation (long story, Google it if you’re bothered). This was the first true collaboration between the titans of the comics industry, and it’s a tribute to the organisation involved that Superman and Spider-Man (as well as guest villains Lex Luthor and Doctor Octopus) are note perfect in this mega-sized saga. This is a FN+ cents copy of this ground-breaking item, light to moderate edge and corner wear, but clean and unimpaired cover, nice interior pages, and the squarebound spine, though slightly stressed in places, strong and intact.
PICTURED: SUPERMAN VS THE AMAZING SPIDER-MAN FN+ £75 SOLD