*Marvel: Well, they don’t come much more ‘firsty’ than this one! One of the most sought-after issues of the Marvel Universe, this is not only the first appearance of the original X-Men themselves, but also their arch-nemesis Magneto. This is the comic which sparked Marvel’s most popular franchise (arguably tying with Spider-Man), and a Lee & Kirby classic which established the X-Men as Marvel’s ‘outsiders’ from the very beginning. This copy is UK pence priced, and while complete and intact, with no staining, scribbling or missing parts, is extremely worn, graded as PR/FA. There is moderate spine roll, the cover is detached at lower staple, and there is extensive spine, edge and corner creasing, though these constitute light multiple creases rather than heavy single ones. The white front cover image, though not specifically soiled, is discoloured through age, and there is a general feeling of ‘dinginess’ to the cover. Interior pages are clean and presentable. Nonetheless, a complete copy of an issue with multiple debuts of significant characters, and the launch pad for Marvel’s most lucrative franchise. High resolution images are available on request.
PICTURED: X-MEN #1 PR/FA p £1100 SOLD 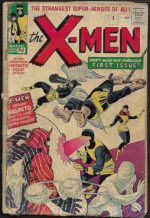 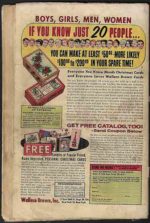 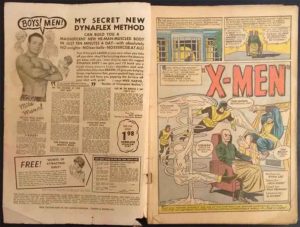