*Marvel: Amazing Spider-Man #300 is just about the most sought after post Bronze Age comic, so we’re delighted to present a high grade copy new to the marketplace this week. There were few more significant debuts, in the latter days of the 20th Century, than everyone’s favourite brain-eating symbiote Venom, who graduated from being a genetically modified costume in a jar to the Alpha Dog of Spidey’s Rogue’s Gallery! Having debuted in Secret Wars #8 as a semi-sentient blob which configured itself into Spider-Man’s new costume, the ‘symbiote’ became a regular feature in Spidey’s own series before being revealed as a malevolent alien parasite! Now more popular than ever, Venom has starred in his own solo film sans Spider-Man (with a sequel in the works) and the value of this comic has continued to rise significantly over the last couple of years. Lots of copies of this landmark issue by fan favourite artist Todd McFarlane have a printing defect to the right front cover edge, so that the finishing cut is a little rough; this copy is mercifully free of this. Brilliant colour and gloss, sharp corners, tight and flat, firm staples, white pages, everything you would want, with only barely noticeable extremely minor reading wear to prevent an even higher grade. High resolution images are available on request.
PICTURED: AMAZING SPIDER-MAN #300 VF/NM £700 SOLD 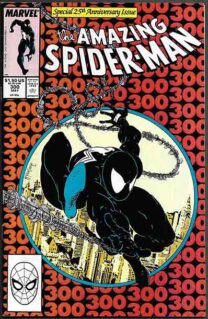