*Marvel: Amazing Spider-Man #300 is just about the most sought after post Bronze Age comic, so we’re delighted to present a copy new to the marketplace this week. There were few more significant debuts, in the latter days of the 20th Century, than everyone’s favourite brain-eating symbiote Venom, who graduated from being a genetically modified costume in a jar to the Alpha Dog of Spidey’s Rogue’s Gallery! Having debuted in Secret Wars #8 as a semi-sentient blob which configured itself into Spider-Man’s new costume, the ‘symbiote’ became a regular feature in Spidey’s own series before being revealed as a malevolent alien parasite! Now more popular than ever, Venom has starred in his own solo film sans Spider-Man (with a sequel in the works) and the value of this comic has continued to rise significantly over the last couple of years. This is a lovely copy with no defects to the front cover which appears as new. The rear cover has a small number of stress marks at the spine; these are all tiny except for a faint one of about 2 cm towards the bottom. There are also some minor handling marks at the top edge. In common with many other copies we’ve seen, this copy has a printing defect to the right front cover edge, so that the finishing cut is a little rough (apparently, this is due to inexperienced staff in the printing plant, although it looks like a blunt guillotine has been used). As usual, the cover design disguises this. This is a known characteristic and we infer from information on the net that CGC, for example, regard this as a printing defect and do not factor it in to their grading below 9.8. Even so, we have tried to allow for it in our grading.
PICTURED: AMAZING SPIDER-MAN #300 VF+ £460 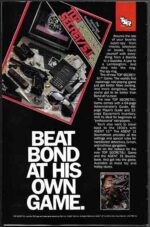