*Marvel: A high demand Bronze Age classic this week. One of the later breakout characters of Marvel, Frank Castle, aka bereaved urban vigilante the Punisher, became one of the company’s super-stars in the 1990s, but had spent most of the previous two decades ‘bubbling under’ as a guest-starring anti-hero. His media presence – and commercial appeal – has been heightened by numerous film and TV appearances. The Punisher’s first appearance in Amazing Spider-Man #129, February 1974, has always been rarer in the UK, where, owing to the presence of Spider-Man Comics Weekly, the US title was embargoed for distribution for several years. This is a cents copy (there are no pence copies, of course), in fabulous condition, with vivid cover colour and gloss. Free of the often-seen rippling effects on so many copies that came here as ballast. Flat and tight with firmly attached staples and creamy pages. There are just a few hints of corner blunting, the tiniest stress marks at the spine (this is me being really picky), and a soft faint 7 cm crease across the top left cover that is very hard to spot; none of these marks break colour. High resolution images are available on request.
PICTURED: AMAZING SPIDER-MAN #129 VF- £1,850 SOLD 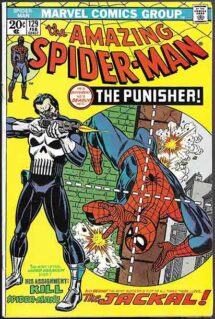