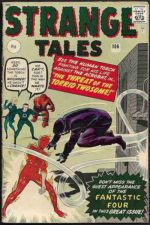 *Marvel: Johnny Storm, the Human Torch, becoming discontented with his role in the Fantastic Four, strikes out with a new partner, the Acrobat, as ‘The Torrid Twosome’ (a much less mirth-inducing title then than it would be now), to the chagrin of his former partners. Needless to say, it’s all a bluff, as Johnny pretended to fall in with the Acrobat to learn his larcenous schemes – and while it was refreshing to see Johnny not played as a dupe for a change, this issue would have been glossed over as unremarkable, but for the fact that the Acrobat later resurfaced as a faux-Captain America, testing the waters for the eventual Silver Age revival of the genuine Cap. This ‘prelude to a pilot’, as it were, is FN p, with light spine wear and very slight foxing above upper staple area, but clean bright pages and firm staples.
PICTURED: STRANGE TALES #106 FN p £70