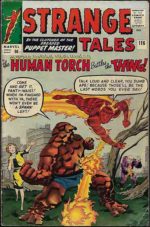 *Marvel: By the time of Strange Tales #116, the Torch’s series was faltering, bogged down by C-list villains and creators who couldn’t decide on a direction for the strip. This was resolved, for a time, in this issue, when Johnny’s frenemy from the FF, Ben Grimm aka the Thing, co-starred, and the strip gained a new synergy. But what could make Ben turn against Johnny? Well, no spoilers, but it rhymes with ‘Muppet Pasta’! Be that as it may, the Ben/Johnny dynamic livened things up enough that Johnny’s solo strip became a double act, at least until Nick Fury and his Agents of SHIELD rolled up a few years later. In the back, of course, is Dr. Strange by Lee & Ditko, ‘Return to the Nightmare World!’, a thing of true beauty. This is an exceptional Fine copy, clean and bright with only a tiny amount of fine creasing at the lower cover corner, not impeding the cover scene.
PICTURED: STRANGE TALES #116 FN p £70