*Marvel: Writer/Artist Jim Starlin, together with scripter Mike Friedrich, took the Captain Marvel character, largely moribund by the early 1970s, and placed him on a galactic canvas, in the process opening up a much broader horizon for the Marvel Universe. Opinion remains divided, but the balance of judgement falls on this having been A Good Thing, allowing for such cosmic crossovers as the decades-later Infinity Gauntlet and its offspring. Having introduced most of the major players in Iron Man #55, Starlin developed Thanos and his fellow Titans into significant figures, and these issues laid the groundwork. This run comprises #25-33 complete, with the second, third and other early appearances of Thanos, as well as guests Mentor, Eros, the Destroyer, Moondragon, the Thing and the Avengers.
IN THIS UPDATE: CAPTAIN MARVEL
#25 VF p £70 (PICTURED)
#26 VG+ p £38
#27 VG- p £33
#28 FN/VF p £90 (PICTURED)
#29 VF+ p £65 (PICTURED)
#30 VG/FN p £30 SOLD
#31 VG+ £22.50 SOLD
#32 VG/FN £35
#33 FN £43 (PICTURED) 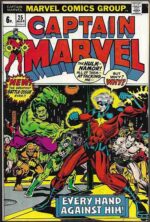 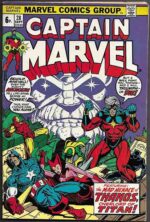 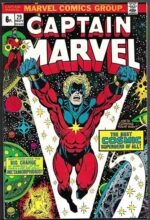 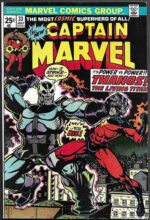