*Marvel: From 1981, and the days when alternate future storylines were not nearly as cliched as they’ve since become, one of the most compelling of them all: the classic ‘Days Of Future Past’ two-parter from X-Men #141-142 by Claremont & Byrne. This was virtually Byrne’s swan song on the title. Featuring an aged X-Men line-up against the Sentinels (and the first appearance of Rachel Summers, who became Excalibur’s Phoenix, (later Marvel Girl II)), this really is the story where, as the cover gleefully proclaims, ‘Everybody Dies!’ Already a sought-after two-parter, but its popularity (and value!) skyrocketed after the release of the X-Men film, ‘Days of Future Past’, which adapted the narrative to the big screen (though, it must be said, Wolverine was very unconvincing in the role of Kitty Pryde…).
PICTURED: X-MEN
#141 FN p £75 Glossy and colourful copy with great staples and white pages; just minor handling wear to top and bottom right corner edges.
#142 VF+ £75 Beautiful copy with just a minor dink to the bottom spine. 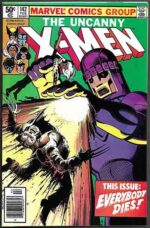