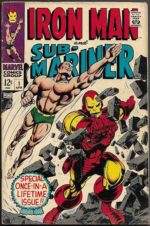 *Marvel: ‘What’s Old is our feature where we highlight stuff from our catalogue that you may have missed. A Special Once-In-A-Lifetime Issue’, the cover of this one-shot boasted, and its unique position is simply a result of a scheduling tangle which arose when Marvel was finally allowed by its distributors to increase its range of titles. The Hulk took over the numbering of Tales to Astonish and Captain America the numbering of Tales of Suspense, but that left ‘orphaned’ chapters of the Iron Man and Sub-Mariner serials languishing, so they were used in this oddball one-off so that both Iron Man and the Sub-Mariner could start off their #1 issues with clear storylines. Nevertheless is has found ‘fame’ in recent years as a Marvel #1! Joyfully, both strips were pencilled by the superb Gene Colan. This new addition is an above average cents copy, clean & bright, sound firmly-attached staples, good cover colour and minimal edge & corner wear, apart from some creasing across a small bottom right corner of the cover. One of the easiest Silver Age Marvel titles to complete – buy one and you’ve got the set! Prices are rising on key Sub-Mariner issues, following rumours that he will be appearing in the MCU Phase 4.
PICTURED: IRON MAN & SUB-MARINER #1 VG/FN £170