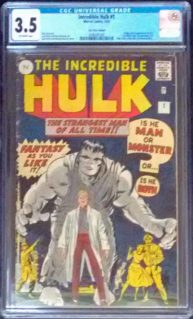 *Marvel: What’s Old is our feature where we highlight stuff from our catalogue that you may have missed. This week, a

jewel in the crown of the Square Mile Collection! In 1962, following the success of the Fantastic Four, Marvel were casting around for their next hit. Combining elements from popular TV shows of the time, Lee & Kirby brainstormed a ‘mash-up’ of Frankenstein and Jekyll & Hyde – the old horror movies then going great guns on late-nite TV – and threw in a jive-talking teenager a la ’77 Sunset Strip’s ‘Kookie’, leavening the mix with a hearty dose of Cold War paranoia. The result was the Incredible Hulk; mild-mannered scientist Bruce Banner runs out into a gamma-bomb test to save the life of a feckless teen, and in consequence Banner becomes the Hulk, a creature of incalculable strength and uncontrollable rage! Most key components of the Hulk mythos were introduced here: Banner and the Hulk himself, perpetual hero-groupie Rick Jones, love interest Betty Ross and antagonist General ‘Thunderbolt’ Ross – but several elements needed to be refined, including our hero’s skin colour. In this first issue only, he was grey, like the monsters in the black & white TV horror shows; from #2 onwards, without explanation, he became the emerald-hued behemoth we love today. But the main theme of the character – intelligence and compassion warring with brute strength – was evident from the beginning, as Bruce, not the Hulk, turns an enemy into an ally and saves the day. Curiously, the Hulk was an initial flop, cancelled after six issues, and condemned to a few years as a guest villain or back-up strip until the revival of his solo title in 1968, but this is where his long career began. This is a CGC Blue Label (no restoration) 3.5, a VG- equivalent, a pence copy (or ‘UK Price variant’, as our American cousins would have it). Several fine lines at the spine and corners do not detract from the central cover image, with beautiful unfaded midnight-blue cover background colour. Hulk #1 is regarded by many authorities as the second rarest Marvel key issue (behind Amazing Fantasy #15, with Fantastic Four #1 in third place); we have only been lucky enough to have three or four copies through our hands in our near 30 years of trading.
PICTURED: HULK #1 CGC 3.5 VG- p £10,000 SOLD