*Science Fiction, Fantasy & Horror: We’re delighted to add more than ten of Keith Laumer’s works to our shelves, including perhaps his best known classic, A Plague Of Demons. A highly respected author, he was versatile enough to write 3 Avengers novels in the 1960s in addition to his SF output. Laumer’s Science Fiction often used his experiences in the diplomatic service, particularly in his Retief series, of which we have Retief And The Warlords. Another recurring theme was alternative universes, explored in The Time Bender, The World Shuffler and Worlds Of The Imperium. Time travel and immortality come up in A Trace Of Memory, Time Trap and Odyssey (an omnibus which combines parts of Galactic Odyssey, Dinosaur Beach, Once There Was A Giant, Greylorn and Alien Minds). Finally The Monitors and Earthblood, which was written with G B Rosel, involve alien races.
PICTURED:
A PLAGUE OF DEMONS VG/FN £6 SOLD
THE TIME BENDER GD £4
WORLDS OF THE IMPERIUM GD £3 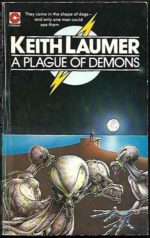 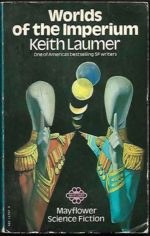