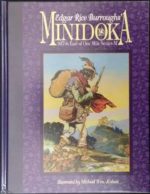 *Science Fiction, Fantasy & Horror: Before the blockbusters A Princess of Mars and Tarzan of the Apes, Minidoka 937th Earl Of One Mile Series M was an early story by Burroughs. At the time of its release by Dark Horse in 1998 it was his earliest-surviving unpublished story. Minidoka (as it’s known to its friends) presages what was to come, involving as it does two opposed magical kingdoms, and even flying monkeys. The book comes with a statement ‘meant to be read aloud’, with a cover painting by J. Allen St. John and sumptuous interior illustrations by Michael W Kaluta.
PICTURED:
MINIDOKA 937th EARL OF ONE MILE SERIES M VG/FN £15