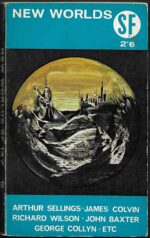 *Pulp Fiction: New Worlds was the longest-running and most famous (some would say infamous) of all British science-fiction magazines. It had pretty much trodden the paths of quality mainstream science fiction from its inception as a fanzine in 1936, through the first issue called New Worlds in 1946 and up to 1964, when publication was taken over by Roberts & Vintner under their Compact imprint and Michael Moorcock replaced Ted Carnell as editor. At this time, still dubbed a magazine, the format became traditional-sized paperback book and the content began to reflect the new wave of British and American science-fiction that revolutionised the genre. Alongside the work of Moorcock himself (and his aliases), you’d find big names such as Brian Aldiss, J G Ballard, Harry Harrison, Bob Shaw, John Brunner, Roger Zelazny, Thomas M Disch and many others, alongside less well-known (but often equally good) authors such as Arthur Sellings, David Masson, Langdon Jones & Charles Platt. And that’s just a selection of the writers that can be found in the seven issues we have new in as shown below.  I grew up reading these and they hold a fond place in my memory — I expect I’m not alone.