*Science Fiction, Fantasy & Horror: What’s Old is our feature where we highlight stuff from our catalogue that you may have missed. Roger Zelazny, who died tragically young at 58 in 1995, is my favourite American science fiction author. I grew up reading his earlier, award-winning masterpieces such as A Rose for Ecclesiastes and The Doors Of His Face, The Lamps Of His Mouth (wonderful tales of Mars and Venus collected with many other gems in the anthology that bears the title of the second story) and He Who Shapes (a novella later expanded into the novel The Dream Master). In the latter, Zelazny touched on a theme he was to explore in great depth over future years; he often depicted characters from myth, set in a modern or future world, calling on several pantheons in various works: Egyptian in Creatures of Light and Darkness, Greek in This Immortal, Hindu in Lord of Light etc. But he will probably be most fondly remembered for his Amber series, a huge ten book epic that has all the Zelazny trademarks: mythologies, experimentation with form, an often clipped and laconic style more reminiscent of hard-boiled detective writers such as Chandler or Hammett and the tension between the ancient and the modern, surreal and familiar. Jack of Shadows (not part of Amber but very much in the same style) is a tour de force and the post-apocalyptic Damnation Alley was filmed (although not very well). Most of the titles mentioned are in stock in our catalogue, including the entire first five book sequence of Amber and many others. If you’ve not discovered Zelazny, I can recommend him as a wonderfully entertaining and imaginative author; I deeply regret that we are denied the continuation of his Amber series, which he evidently had planned.
PICTURED:
DAMNATION ALLEY 1ST PB 1973 VF £10
JACK OF SHADOWS 1ST PB 1974 VG/FN £20
THE DOORS OF HIS FACE, THE LAMPS OF HIS MOUTH AND OTHER STORIES 1ST PB 1975 VG £8
THE HAND OF OBERON 1ST US PB 1977 FN £10 (Book 4 in the 1st Amber sequence)
THIS IMMORTAL 1ST PB 1968 FN £20 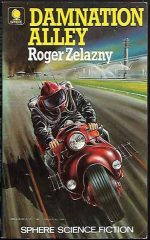 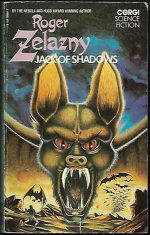 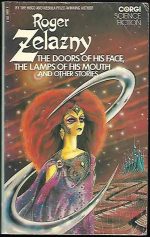 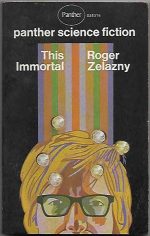