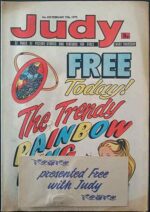 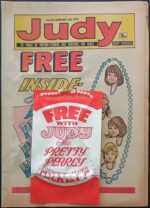 *Girls Comics: Judy, home to Wee Slavey, Nannette of the North, Bobby Dazzler and a host of others, launched in 1960 following the success of its slightly older sister Bunty, and the pair dominated the UK comics scene for several years. We’re lucky to have two consecutive issues from 1972 bearing their original Free Gifts: #631 has the ‘Pretty Pearly Necklace’, still mounted on its original card; please note that although complete, the string is actually broken. #632 has the ‘Trendy Rainbow Ring’, still inside the original sealed envelope. The defects in the comics are caused by the stress on the paper of having the sometimes bulky gifts inside for decades, so they are only due to pressure, although both comics are browning at the edges.
PICTURED: JUDY
#631 VG WITH FREE GIFT GD/VG £25
#632 VG WITH FREE GIFT VF £40