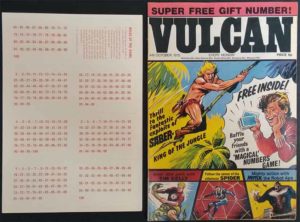 *Boys’ Adventure & War Comics: One of the earliest attempts to coherently re-present the Fleetway/IPC classic adventure series was 1975’s Vulcan, an experimental weekly which was smaller than usual – closer to American comic-book size – contained many colour pages, and reprinted in sequence several much-loved series from the past: The Spider, Kelly’s Eye, Trigan Empire, Robot Archie, Sabre, Mytek the Mighty and the Steel Claw. Launched successfully as a trial in Scotland, a national edition was rolled out in late ’75, and ironically lasted fewer issues than the trial run! The slick paper was a bit fragile, and copies of the short-lived series don’t survive damage well, so we’re delighted to have a FN copy of issue #2 of the National edition in this week, with the free gift – Magical Numbers Card Game – in VF! The game was originally presented in a punch-out card, and this copy is completely unpunched, all pieces firmly in situ.
PICTURED: VULCAN 4/10/75 (#2) FN WITH FREE GIFT VF £45 SOLD