*Humour Comics: In 1973, D.C. Thomson decided to introduce a stablemate to its broadsheet-sized Beezer and Topper weeklies, and Buzz joined the lineup for a respectable 100+ issue run, packing a lot into the oversized pages, fronted by ‘Hop, Skip and Jock’, wherein our inventive but impecunious trio coined an outlandish money-making scheme each week. Other features included ‘The Twitz of the Ritz’, ‘Fred the Flop’, ‘Jimmy Jinx’, ‘Calamity Kate’, and token racist caricatures ‘Wig and Wam’! Issue #1 is VG, a bit ‘bumpy’ on the pages owing to the free gift ‘Pop Pistol’ having been stuck inside for decades. The Pistol itself, however, is VF in original packaging. Issue #3 is FN with the ‘Whoopee Whistle’, again in original packaging, in VF. NB: Like most comics of this unusual size, Buzz was often displayed and sold folded horizontally, and although we send out flat copies, both of these issues do have a crease from said previous folding. This has been taken into account in grading these copies.
PICTURED: BUZZ
#1 VG WITH FREE GIFT VF £80 SOLD
#3 FN WITH FREE GIFT VF £60 SOLD 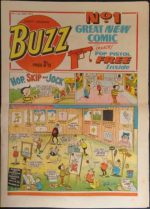 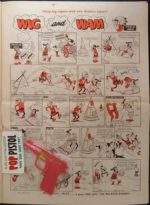 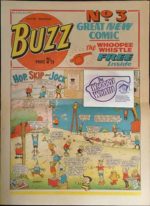