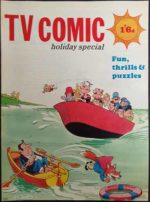 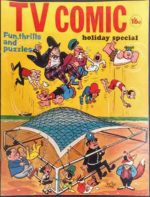 *TV & Film Related Comics: For more seaside summer fun (appropriately, as we type this on a torrential March afternoon), we offer TV Comic Holiday Specials from 1968 and 1969. While these are not the earliest Holiday Specials of the long-running Polystyle publication, they are among the most in-demand, as in addition to the regular funny features – Diddymen, Mighty Moth, Basil Brush, TV Terrors, Popeye – both featured TV’s ‘Doctor Who’, (the Patrick Troughton iteration, in comic strip form) and the 1969 edition also has a text story of TV’s ‘Avengers’, John Steed and Tara King! These uncommon items are in exceptionally nice nick – the 1968 is FN/VF, marred only by slight weakness at the upper staple area, and the 1969 is an unchallenged VF.
PICTURED TV COMIC HOLIDAY SPECIAL
1968 FN/VF £80 SOLD
1969 VF £65 SOLD