*Girls’ Comics: It’s not often that we are at a loss to definitively identify dates for our stock, but this time we have to own up: Bessie Bunter and her pals have stumped the panel! We have four June and School Friend Holiday Specials new to our lists this week, but the earlier two have neither external date nor interior copyright dates, and the information on the internet and elsewhere is both scanty and contradictory. We believe the one pictured with Bessie and chum in a boat is 1968, and that the cover with Bessie on an inflatable is 1969, but we regret we cannot be certain. If you have any definite information, of course, please let us know. The other two are more easily identified, but equally rare in these nice grades. The putative 1969 is only Good, owing to upper spine wear, but the other three are a remarkable FN/VF grade, not commonly found in these extra-sized issues from the late Sixties and early Seventies. ***FURTHER UPDATE*** We’re indebted to one of our wonderful customers for confirming that the Special we’re calling 1968 is correctly dated, and that the one we’re calling 1969 is probably 1967 — now corrected below and in our catalogue.
JUNE & SCHOOL FRIEND HOLIDAY SPECIAL
1967 GD £60
1968 FN/VF £100
1970 FN/VF £100
1971 FN/VF £80 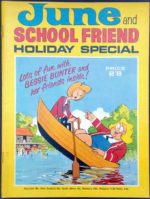 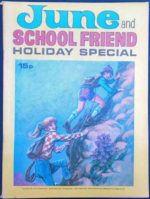