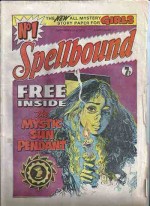 *Girls’ Comics: Although ‘strange stories’, with a genteel supernatural element, had been a staple of girls’ weeklies since the mid-1960s, Spellbound was the first girls’ weekly to devote itself to the theme. While many of its series, including its best-remembered serial ‘Supercats’, with four young super-heroines dispensing justice throughout the galaxy, were science-fiction, the majority featured ghosts, witches, curses and mysterious creatures and apparitions to terrify its young audience. Launched by D.C. Thomson in 1976 – and lasting a mere 66 issues before yielding the field to its IPC-published successor and imitator, Misty – Spellbound is fondly remembered and keenly sought these days because of the quality of its scripts and artwork. Only eight issues new to our stock this time, but they’re all from the first 11, and commence with #1, mostly numbers previously unrepresented in our lists!
PICTURED: SPELLBOUND #1 GD £25