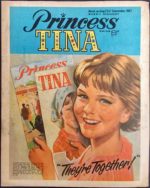 *Girls’ Comics: Following on from our recent ‘Tina’ update, we move now into late 1967 and 1968, where the upstart Pan-European ‘Tina’ had merged with the venerable ‘Princess’ to become Princess Tina, a title the series retained for most of the rest of its existence. We have 44 newly listed issues from this period, beginning with 23rd September 1967, the first ‘merger’ issue, where Princess alumnae Alona and Sue Day and the Happy Days joined Glory Gold, the Space Girls, My Chum Yum Yum, Jackie and the Wild Boys, slave girl Moira and model girl Barbie in an anthology fronted, appropriately, by voluptuous super-spy Jane Bond. This selection closes with the 1968 Christmas issue – by which time ‘Chairman Cherry’ had replaced the ‘Space Girls’, alas – but look forward to more Princess Tina updates in the near future!
PICTURED: PRINCESS TINA 22/9/67 VG £9