↓
Home→What's New→It’s A Jungle Out There: The Story of Lorna the Jungle Girl (sometimes Queen)

Although these days she may be regarded as something of a backwater of the Marvel Universe, Lorna the Jungle Girl was successful enough following her launch in 1953 to sustain a 26 issue series (something many of today’s titles would be proud of). Not that she was truly part of the Marvel Universe, of course;  Marvel in those days was known as Atlas, and Lorna is perhaps one of the few characters in Marvel’s history (who had her own title) not to be reinvented in the Silver Age or since.

It was a crowded jungle by the time Lorna found her way into it. Tarzan had boomed on the silver screen long before comics had started up properly, and he wasn’t long in becoming the first of a long line of jungle kings and queens to take up residence in Africa (it’s a good job they didn’t have social distancing then).  Sheena (the first female character to get her own series), Rulah, Zago, Zegra, Jo-Jo, White Princess of the Jungle, Kaanga, Judy of the Jungle, Princess Pantha, Camilla, Tiger Girl etc all preceded Lorna. Even within Atlas she had her rivals: Jann of the Jungle, Lo-Zar, Jungle Boy and Leopard Girl. And that’s even without counting other characters whose habitat was the jungle but were less the swinging through the trees dressed in animal skins types, such as the Phantom, Jungle Jim and Nyoka the Jungle Girl.  It was a popular place. 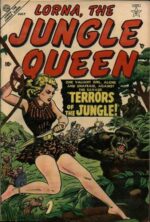 So, what makes Lorna special? Let’s take a look at her debut issue. (The first five issues were entitled Lorna the Jungle Queen before she was ‘dethroned’ (without explanation) for issues #6-26). Lorna was created by writer Don Rico, who wrote all her stories and artist Werner Roth, who drew all the Lorna stories up to #12, with Jay Scott Pike taking over from #13 to the end of the series.  In the initial story, rather unimaginatively entitled ‘The Coming Of Lorna’, we are introduced to a white man and his grown daughter. The man is a hunter whose home has been the jungle for 35 years; unfortunately, on the very first page, he is savaged by a lion and sustains injuries from which he eventually dies. His daughter, Lorna, vows to become as great a hunter as her father had been, to compensate for the son he never had, and a friendly native, M’Tuba, volunteers to teach her the skills of spear and knife, assisted by Mikki the monkey. A page later (although in fairness many months have passed), Lorna is ready to adopt an outfit of animal skins (less revealing than many of her jungle ‘siblings’,), but before she can set about putting her skills to use, Lorna and M’Tuba are captured by the notorious Wafisi tribe and taken to their village. Before the apparent cannibalistic ritual, Lorna manages to escape and best the Wafisi witch doctor. She proclaims herself witch doctor, and appoints M’Tuba to rule in her place. The Wafisi tribe hail her as ‘the jungle queen’.  Lorna then vows to ‘travel deeper into the jungle… as my father would have wanted me to… to seek out others who may need help!’ M’Tuba gifts her Mikki the monkey, and together girl and monkey ‘walk into the deep shadows of the African jungle… into the mysterious unknown!’

Okay, so as origin stories go, it’s a little lame, unoriginal and not terribly exciting; I mean, she wasn’t bitten by a radioactive snake or had a transfusion of mongoose blood or anything auspicious like that.  I don’t know about you, but I often think that can be the way of origin stories, in this case just setting up a series of adventures rather than being a deep and meaningful adventure in itself. The pace picks up a bit in the remaining two stories, with Lorna up against a giant ape and then some white diamond hunters, who end up finding that the mine is in fact the belly of a giant snail (!), and we do mean ‘giant’, roughly the size of a small mountain.

In issue #2, Lorna meets her main squeeze, Greg Knight, a ‘woman-hating hunter’ (because he got thrown over by one once). Lorna is immediately enamoured of him, but his catchphrase turns out to be ‘a jungle is no place for a woman!’ (How ironic… choke). Invariably, for the rest of the series, Greg needs Lorna’s help, although he’ll never admit it. He also gets his own regular strip in the comic without Lorna. And thus the series continued, with familiar jungle tropes of lost civilizations, giant monsters, evil white hunters, natural disasters, hostile natives, sinister doubles, rotten witch doctors etc,  etc, all with the same dynamic between Greg and Lorna, which adds some irony and humour to the series (such as when Greg gets outsmarted by Mikki). 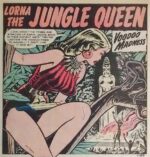 Werner Roth’s Lorna is set in a dark and shadowy jungle, with very effective use of light and shade,  a highly imaginative design and style, and a fluidity which belies the stiffness of his later work (as by Jay Gavin) on Marvel’s X-Men. Lorna herself is beautiful, but somehow darkly ethereal and belongs in this jungle world. (Our resident fashion guru, Dr. Evilla, when she was preparing the scans for this article, wondered where Lorna got her hair done and wants the address of that jungle hairdresser.)

Jay Scott Pike’s style was quite different; his jungle was lighter and the art seemed more two-dimensional, lacking the depth and perspective of Roth, but still very competent, with Lorna just as lovely, if somewhat less dark. The tone of the series remained the same, with Rico still scripting.

The very final story, in Lorna #26, sees our heroine in the big city and wearing a dress, with Greg assuring her that ‘this is where you belong, Lorna… not in the jungle!’ Following a harrowing rooftop adventure with an escaped ‘night beast’ (part ape, part lion and all demon), Lorna emerges victorious and the creature is captured to be returned to the jungle where it belongs, according to the police. Lorna suggests to Greg that they do too, and Greg has to admit that Lorna is right at last: ‘Back we go!’ And we assume that’s what they did. For Lorna never appeared again. For all we know, she and Greg are there still, in their love/hate relationship, keeping the jungle safe from all manner of stuff.

Finally, a word about the covers. Neither Roth nor Pike were ever trusted with them, Atlas preferring a whole range of different cover artists: Carl Burgos (including #1), Christopher Rule, Al Hartley, Russ Heath, Harry Anderson, Syd Shores, Joe Maneely, Al Williamson, Vince Colletta and, for five of the last six issues, the wonderful Bill Everett, producing the best artwork on the entire series. We make no apologies for reproducing all five of his covers at the end of this article. A great pity that Everett never got to draw the insides. Although, he kinda did. In Riot #6 (June 1956), Atlas’s Mad-like parody series, Stan Lee himself scripted Loona, the Jungle Girl, a three page pastiche with art by Bill Everett; what might have been (sigh…).

Still, there’s no denying the appeal of the Lorna series. Less violent and with much better art than the Fox jungle characters, more charm and wit than the Fiction House and Nedor ones, Lorna is my favourite jungle girl. 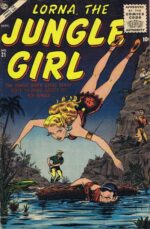 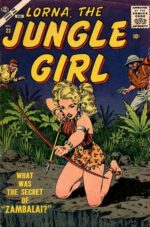 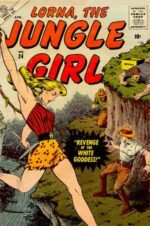 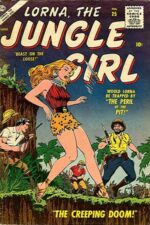 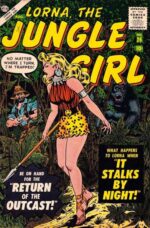