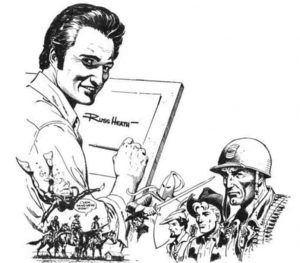 Prolific comic book artist Russell Heath Jr, better known as Russ Heath, passed away at the age of 91 in Long Beach, California. According to his daughter, Sharon Heath Herzel, the cause of death was cancer.

Born in Manhattan on September 29th 1926, Heath began his career in 1941 on the obscure aviation title Contact Comics and, save for a brief spell in the US Air Force, worked consistently in the field until the early years of this century. His career covered a multitude of genres, including western, crime, horror, fantasy/adventure and even occasional romance stories, but his greatest body of work was for the war genre, most notably in the series Sgt Rock and The Haunted Tank. His hyper-realism, heroic figures and meticulous attention to detail in terms of uniforms, weaponry and artillery gained him huge popularity in the field and among his fellow artists – Heath’s accuracy became so renowned that other artists used his work rather than photos as reference for their own stories.

Unusually, Heath seldom ventured into the superhero field which dominated the comics arena, with only a handful of superhero credits to his name – a 1950s Human Torch story, an issue of the revived Mr Miracle, a story arc in Legends of the Dark Knight and a chapter in the Justice Society Returns event being his only notable contributions. His closest approximation of a regular super-hero title was the adventure series Sea Devils, where his superlative illustration technique made even the (frankly) rather ludicrous stories into glowing fantasy epics.

He did, however, diverge into a different kind of fantasy comic when he produced pages for Kurtzman and Elder’s ‘Little Annie Fanny’ strip which ran in Playboy magazine.

Heath was one of the artists plagiarized by ‘Pop Artist’ Roy Lichtenstein, whose large-format tracings of comic panels created a stir among the art world in the early 1960s. When in his 80s Heath addressed this in a six-panel comic strip and made the same point, somewhat less subtly, to the Boston Globe in 2006, in an article entitled ‘Lichtenstein: Creator or Copycat?’.

Heath’s final comics work was a four-page flashback sequence for Iron Fist in 2009, and illustrations for Dave Sim’s Glamourpuss in 2010 and 2011. 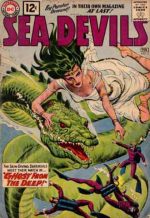 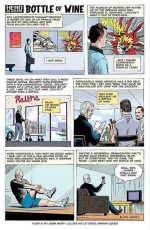