Oh, entertaining enough drivel – they were fun nonsense, suggesting that a short ginger freckle-faced junior reporter could also have an international (nay, interplanetary) fan club, and be irresistible to ladies from outer space, other dimensions and beyond the realms of time. You had to turn your brain off when you went into Jimmy’s world, but the amusement value was generally worth it, with their dream-logic, barely coherent and thoroughly bizarre events.

Jimmy was vain, impulsive, and overconfident, socially maladroit while considering himself sophisticated, yet loyal, brave, resourceful and compassionate; a self-contradictory ‘everyman’ and identification figure perhaps a decade older than his intended readership. The impressions of adult life – especially of romantic relationships – that young readers received were peculiar, mind. Every one-shot love interest introduced for Jimmy turned out to be an alien, villain, robot or some combination of the above.

But in Jimmy Olsen #36 (April 1959) we were introduced to Lucy Lane, younger sister of Lois, an air hostess who rapidly became Jimmy’s steady. And he, and the readers, found out what a REAL monster was like!

In that first story, Lucy was simply presented as fickle and thoughtless. She broke a date with Jimmy four times when a ‘better prospect’ came along – two rodeo stars (one of whom was a disguised Jimmy), a scientist and a robot (also a disguised Jimmy – look, just go with it, all right?) Four times she attempted to ‘trade up’ for one date on the same night. In a nine-page story!

Then… things got worse. Persuaded to become Jimmy’s steady girl, but unable to marry him because she’d promised her parents she wouldn’t wed until her older sister, Lois, became Mrs. Superman (good luck with that), Lucy just hung around like a bad smell, frequently dumping our hero for more eligible prospects, nagging, belittling, criticizing, ridiculing and being a major drag. Granted, Jimmy was a well-meaning doofus, but he didn’t deserve this kind of abuse.

The reason for Lucy’s introduction is easy to deduce. In 1954 when Jimmy’s solo series launched, comics were still reeling from the accusations of Doctor Frederic Wertham, the psychologist who decried comic books as hotbeds of juvenile delinquency and social and sexual deviation, including homosexuality. Jimmy’s relationship with Superman in the early years of his series was half surrogate father/son, half hero-worshipping man-crush. All completely innocent, but the editors got twitchy enough of appearances that a regular girlfriend for Jimmy was mandated.

But even the much-decried Lois Lane and Lana Lang behaved better than Lucy; while they were portrayed as ‘rash’ and ‘impulsive’ and ‘hysterical’ and all the other sexist Silver Age euphemisms for ‘irrational because they menstruate’, they also were permitted to display courage, loyalty and ingenuity from time to time. Readers only ever got to see the bad side of Lucy – to the point where when she was kidnapped and used as a ‘damsel in distress’ prop, it was actually a relief!

Except in three stories. Well, they all could be taken as chapters of the same story, though they were separated in time, both real and comic-book time.

We open with Jimmy Olsen #74 (January 1964) and ‘Jimmy Olsen’s Secret Love’. By a startling coincidence – it says so, right there in the captions – both Jimmy and Lucy are assigned undercover assignments by their employers. Jimmy is told a jewel thief will be on a particular flight. Lucy, meanwhile, is what would now be called a ‘mystery shopper’, ratting out her colleagues – er, travelling as a regular passenger to check on standards. Each assumes a disguise to avoid being recognized. Lucy becomes the red-haired actress ‘Sandra Rogers’, and Jimmy, somewhat misinterpreting the meaning of ‘undercover’, dons an attention-getting tuxedo ensemble as stage magician ‘Magi’. By startling coincidence – told you so – the disguised pair are seated next to each other, and following some getting-to-know-you chit chat – during which ‘Sandra’, expresses the opinion Jimmy Olsen is over-rated and too dependent on Superman, and ‘Magi’ expresses a distaste for blondes, each cementing the other’s resolve not to come clean – a fuel leak strands the plane on an ice floe, and the pair kiss passionately and fall in love under the prospect of imminent death. Rescued by Superman – who also scoops up the jewel thief (remember him?) – the pair are separated in the excitement, and wonder if they will ever meet again. Just as well they didn’t have Google in those days!

It’s lightweight – that goes with the territory – but the banter between the two carries a surprising level of maturity, as each realizes – after an obligatory qualm that they’re being ‘untrue’ – that their assumed personae are giving them a chance to relax from the pressures and expectations of their daily lives. Each feels, at least temporarily, that they’re better off as their fake selves than the real, and enjoy the break – well, until the plane crash, obviously. 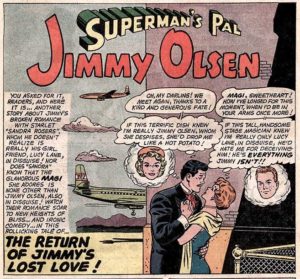 The readership was asked at the end of the story if they’d like to see Sandra and Magi meet again – and apparently they did, as Jimmy Olsen #78 (July 1964) brought ‘The Return of Jimmy’s Lost Love.’ Lucy and Jimmy’s relationship is in freefall, as each is preoccupied with memories of Magi and Sandra, respectively. Gaining another undercover assignment, to investigate Air Mail theft, Lucy disguises herself again as Sandra, for sentimental reasons. Glimpsing ‘Sandra’ at the airport, Jimmy, with a disguise trunk in his luggage, scrambles together a ‘Magi’ outfit and stages a reconciliation, including ‘compelling’ Superman to appear. (Superman, knowing Jimmy is ‘Magi’, obliges his pal. But Supes doesn’t know Lucy is ‘Sandra’, so really he’s just helping Jimmy two-time his girlfriend with some random hot chick! Told you Lucy didn’t win any friends…)

The pair end up helpless as the Air Mail thief – remember him? –is about to gun them down when a contrived coincidence brings Superman to the rescue. Realising the depths of their feelings for each other, ‘Sandra’ and ‘Magi’ also contemplate the inevitable consequences of continuing their relationship – that the truth would out, eliciting an angry rejection. In a surprising display of maturity for a Mort Weisinger comic, each realizes that they must part, and making excuses, they walk away. But when Jimmy and Lucy meet again as themselves, each still has their mind on their lost love who never existed.

The serial was resolved in Jimmy Olsen #82 (January 1965), ‘The Wedding of Sandra and Magi!’ Still dwelling on her feelings for ‘Magi’, Lucy becomes ‘Sandra’ once more and walks around her neighbourhood, reminiscing. By that coincidence again, Jimmy drives by, and seeing ‘Sandra’, can’t resist assuming his ‘Magi’ identity – just in time to save ‘Sandra’ from a mugger! After the thrill of their reunion, however, each has misgivings. Knowing that continuing the relationship would bring exposure, Lucy decides not to see ‘Magi’ again, while Jimmy takes it one step further, faking ‘Magi’s’ death during an heroic rescue!

Depressed and distraught, Jimmy and Lucy ‘settle’, and agree to marry. Yet after the ceremony (but before the wedding night, courtesy of the Comics Code) each decides to break off the marriage. Lucy, leaving a note on Jimmy’s disguise trunk, decides to take a look through for old time’s sake. Guess what she finds? Bits and pieces of ‘Magi’! Showing up for dinner in a red wig, Lucy lets Jimmy know she knows, and in a food fight, the truth is revealed, and the couple’s rage turns to laughter at the absurdity of the situation, as they realize they were in love with each other all along!

Owing to Plot Contrivance, the Justice of the Peace who wedded them turns up just in time to let the couple know his license has expired – they’re not married! Smiling, Lucy and Jimmy agree to stay single, but to continue their relationship in this new spirit of openness and support.

Well, until the next story, when all was forgotten, and Lucy was back to her standard role as perma-grumpy trolley dolly, vicious, selfish and tyrannical as ever.

But for those three stories, there was a reason for Lucy Lane. Instead of serving as a rubber-stamp for heterosexuality, she was given something to actually DO other than be a nag or a drag, and a fleeting chance to display some warmth, intelligence and humour. All three of these stories are attributed to Jerry Siegel, surprisingly, as he’s not known for subtle scripting. While they rely on contrived coincidences and ridiculous situations – they are, after all, 1960s Superman Family tales – they display a surprising emotional range at a time when that wasn’t fashionable. The art on all three, serendipitously, is by Curt Swan, whose mastery of facial expressions perfectly suits the conflicted feelings of the protagonists. None of the other regular Jimmy artists could have done it; John Forte and Al Plastino, no harm to them, simply wouldn’t have been up to the job, and even the superlative Kurt Schaffenberger would have broadened the comedy, diluting the bittersweet appeal of these tales.

So there we are; the only three stories that truly justify the otherwise tedious, spiteful existence of Lucy Lane.