In 1958, DC Comics presented a new science fiction hero, the latest in a line that stretched back to John Carter of Mars and Flash Gordon. Like his famous predecessors, Adam Strange was a contemporary Earthman transported through space for adventures on an alien world. Indeed, the banner heading for Adam’s first appearance in Showcase #17 was ‘Adventures On Other Worlds’ (it wasn’t until #19 that it changed to ‘Adam Strange’, the one and only time in the classic Silver Age that his name appeared at the masthead on a comic cover, since all subsequent appearances came in Mystery In Space).

Adam Strange was created by editor Julius Schwartz and (visually) Murphy Anderson. It was Schwartz (himself a veteran of science fiction magazines) who conceived the idea of an Earthman repeatedly traveling to a planet in the Alpha Centauri star system using a ‘Zeta-Beam’.  Since Adam Strange was the first Earthman on another planet, he named his character Adam after the Biblical first man. Schwartz assigned the scripts to Gardner Fox (although the plots were dreamed up between them) and the artistic duties to Mike Sekowsky. Schwartz, being a science major, gave Fox scientific pointers which lent the series a plausibility far greater than other science fiction comics of the time. 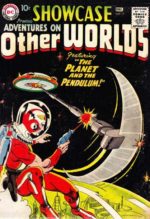 In Showcase #17, Adam Strange is presented as an archaeologist, an Indiana Jones-type figure searching for a lost city of the Incas in the Andes. Pursued by natives, he risks a twenty-five foot leap across a chasm, but never lands. Instead he is struck by a mysterious beam from space and transported to the planet Rann of the star system Alpha Centauri 25 trillion miles from Earth. There he meets the lovely Alanna and her scientist father Sardath in the city of Ranagar. They explain that their ‘Zeta-Beam’ was a communication device sent to Earth four years previously in an attempt to establish contact; due to some unnamed ‘space radiation’, they postulated that the beam had somehow been converted into a teleportation beam. No sooner is Adam starting to settle in than Rann is invaded by a race called the Eternals (!) who are after a rare metal for their home world. Using his spacecraft piloting skills (where did he get those from?) and his wits, Adam is able to trap the Eternals permanently in the fourth dimension, as you do. Just as he succeeds, however, the Zeta-Beam charge wears off and he is teleported back to Earth.

Never fear though because Sardath had previously been able to advise where and when all subsequent Zeta-Beams would strike the Earth (they took four years, but he’d already sent loads!), so Adam was able to beam back to Rann in time for his second adventure and the second alien invasion in the second story in Showcase #17, wherein Adam got the spacesuit, rocket jets and ray-gun by which we came to recognise him. 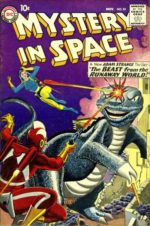 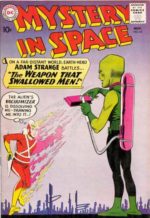 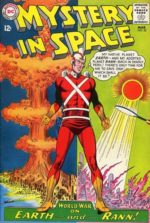 And so it went. Adam Strange had three more ‘try-outs’ in Showcase before being ‘promoted’ to his own series in Mystery In Space, commencing with issue #53 in August 1959. By this time, Schwartz has assigned the pencilling of the strip to Carmine Infantino, whose alien, futuristic cityscapes gave a unique feel to the series and proved a match made in heaven with Fox’s scripts and Schwartz’s editing/co-plotting. Alanna by this time had adopted the yellow and blue outfit she is most famous for, and looked more gorgeous than ever. The run with Schwartz at the helm and his key team in place (more than ably assisted by the wonderful Murphy Anderson inking on most issues) lasted until Mystery In Space #91. Almost invariably, the plot would involve a menace to Rann coinciding with Adam’s arrival, and he was Rann’s champion, overcoming the odds by means of his wits, logic, intelligence and scientific knowledge (as well as his handy ray-gun, of course).  As soon as the threat was over and Adam was all set to get some snuggly time with Alanna, the Zeta-Beam energy would wear off as he was drawn back to Earth. There were variations, of course; we saw something of Adam’s life on Earth, both his archaeology and his high standing in terms of the New York museum where a wing named after him was opening. There were some stories that featured a degree of adventure on Earth, including a visit by Alanna. Story lengths varied too, from being about one third of the comic to full-length tales. There were also some great covers. I would have loved to have been a fly on the wall in Schwartz’s office when he and Fox were coming up with the plots. I’m sure Schwartz had a habit of dreaming up the covers and saying to Fox “Here you go, write a story around that!” (Consider #63, where Adam is being vacuumed up by an alien with, well, what looks like a vacuum cleaner). Then there was the beautiful grey tone cover to #55, the classic split-cover #82, depicting world war on Earth & Rann, and many others. 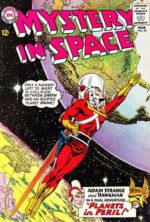 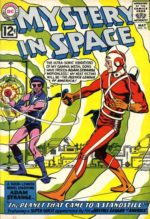 My absolute favourite cover though came on #90, which depicts Adam jetting between Rann & Earth when they are on a collision course. The full-length story to this guest stars Hawkman and Hawkgirl and is one of my all-time favourite comics. It’s also worth singling out the award-winning #75, guest-starring the Justice League of America. This came about because the JLA in their own title were depicted discussing Adam for membership, so it was decided that the adventure where they had met him ought to be told. ‘The Planet That Came To A Standstill’ featured the menace of Kanjar Ro, in a comic that has been dubbed Justice League #3.5, since it took place after the JLA’s clash with that villain in #3 of their own title. I’ve every admiration for the JLA’s regular penciller Mike Sekowsky, but the JLA drawn by Infantino and Anderson here made me really wish they’d been drawing the JLA as well. In those days, crossovers were very special, and #75 and #90 were both landmark issues. There’s one other crossover worth noting: Adam and Alanna played a major role in Hawkman #18 (and a minor one in #19) in 1967, both by Fox and Anderson and totally in keeping with Adam’s own series.

Sadly, all good things come to an end. After Mystery In Space #91, Schwartz was switched to editing the Batman titles and his chosen writers and artists went with him. The Adam Strange strip limped on for a further ten or so issues with lesser hands at the tiller; suffice it to say that we don’t need to concern ourselves with those here. Nor do we really need to consider the many appearances of Adam Strange in the DC universe since then (he’s still around today). The purist in me rebels at what has been done with the mythos, particularly in regard to Rann, so we won’t dwell on that here.

What remains as essential reading is Showcase #17-19 and Mystery in Space #53-91, each one a gem of comic story-telling. Okay, so the stories are formulaic, calling on many classic science fiction tropes and there is little in the way of development, but if you’ve got a winning formula and it ain’t broke, don’t fix it; the stories were created by the finest craftsmen then working in comics, IMHO.  Adam Strange remains an absolute favourite of mine, an intelligent hero, a science fiction character and not a super-hero, using his wits and ingenuity to overcome a different threat eight times a year (the MIS publication schedule) as I grew up alongside him in those early 1960s.

Next time you’re out for your daily exercise, look up. Is it a bird? Is it a plane? No, but it might just be Adam Strange, catching that Zeta-Beam to Rann one last time.