Despite  a short shelf-life – subsequent revivals and ‘updatings’ ranging from mediocre to disastrous – the original series of DC’s Inferior Five remains fondly remembered by a certain generation of comics readers, despite their throwaway origins. 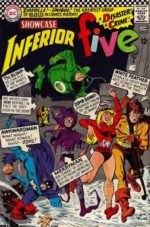 In early 1966 E. Nelson Bridwell, one of the first fans-turned pro in comics, was asked to produce a parody of Marvel’s Fantastic Four for an issue of  Showcase. Rather than produce a simple satire with look-alike versions of the FF, ENB expanded the concept, adding a fifth member and adding the genius touch making them what are now called ‘legacy’ heroes – the grown offspring of the Freedom Brigade, legendary (in the sense that they were entirely made up for the series) super-heroes of the Golden Age.

Our ‘heroes’, for want of a better word, were:

Merryman, son of Lady Liberty and the Patriot, saddled with a heroic tradition on both sides of the family dating back at least a century. Although highly intelligent and intensively trained in unarmed combat, Myron Victor’s Walter-the-Softy physique made all his training ineffective.

Dumb Bunny, daughter of Princess Power; although possessed of her mother’s incredible strength, Athena Tremor utterly lacked the wisdom of her namesake goddess.

The Blimp, son of Captain Swift, inheritor of his father’s power of flight, but no super-speedster, easily outpaced by enemies at a slow walk.

Awkwardman, amphibious son of Mr. Might and the Mermaid; his incredible strength and ability to breath under water were bequests from his parents, but – perhaps because of his hybrid nature – his calamitous clumsiness was all his own.

And the White Feather, son of the Bowman, whose archery skills were every bit as great as his father’s, but whose shaking hands, thanks to his incredible cowardice, negated his marksmanship.

Though none of them would have entered the super-heroic profession by choice, they weren’t given any; their parents’ expectations trapped them in a world for which they were ill-equipped, and they caved in to parental pressure rather than forge their own paths.

Their first outing was against Doctor Gregory Gruesome, a mad scientist only slightly more exaggerated than Luthor & company, whose delighted exclamation: “A chance to shoot a woman – in the back! What villain could resist?” set the tone for the series, a charming combination of slapstick, whimsy and a loving excoriation of super-hero clichés. 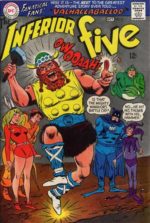 With the artistic aid of Joe Orlando (in Showcase #62 & #63) and Mike Sekowsky (Showcase #65,  Inferior Five #1-6), E. Nelson Bridwell demonstrated his encyclopaedic knowledge of  the entire heroic mythos. In a handful of issues, ENB gleefully skewered the Avengers, the X-Men, the Fantastic Four (he got there eventually…), Giant-Man and the Wasp, the Hulk, the THUNDER Agents, the Man from UNCLE, Tarzan of the Apes, the Green Hornet and Kato, the Scarlet Pimpernel and more. The high spot was issue #4, his take on Thor and the gods of Asgard, which despite its comedic nature proffered, as critic Kathleen Glancy observed: “More authentic Norse mythology in a single issue than the entire run of Lee and Kirby’s Thor.”

It all went a bit pear-shaped with issue #6. In what, in retrospect, was an attempt to ‘Marvel Bullpen’ the DC offices, the issue was a satirical look at the creators, alienating the readership at a stroke by cracking a plethora of in-jokes about people the reader knew little of and cared less. My ten-year old self was bitterly disappointed when not only the multitude of cover-featured guest-stars failed to appear inside, but the heroes themselves graced only a handful of panels, and decades later, my heart remains a seething ball of resentment towards #6! 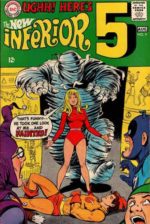 With #7, there was a definite change in tone. Win Mortimer took over the art – his amiable cartooniness suiting the light-hearted tone – but while the stories remained credited to Bridwell, either they were being ghost-written (as some critics, including Mark Evanier, aver) or he had been instructed to dumb it down, with more slapstick and throwaway gags, and no references to panelological or literary history. The parodies were still in play – Iron Pants, Cobweb Kid – but obvious and dismissive, with no-one’s heart seemingly in it. Other than #9, a delightful ‘Night at the Museum’ issue which was pure comedy rather than satire, the later issues of the Five were thin fare compared to previous stellar efforts.

And with #10, the series was done. A two-issue reprint revival in the early 1970s was all we saw of the Five, apart from cameos in various crossover events, until the second series of Angel & the Ape in 1991. This revival of another ENB creation was helmed by Phil Foglio, famous for the cheerful and witty porno comic Xxxenophile. Fogio linked the two series by establishing Dumb Bunny and Angel O’Day as half-sisters, and with Bunny a supporting character in the series, the rest of the Five inevitably turned up, playing a major part in the conclusion. Foglio reputedly wanted to follow up with an Inferior Five mini, but A & A’s sales, alas, didn’t justify it.

The Five’s last hurrah, oddly enough, was unexpectedly in the morass of… (shudder) modern comics. In the final issue of the early 2000s Brave & Bold, #35. The Legion of Substitute Heroes, in an attempt to get some publicity, travel back to the past to pick up the Doom Patrol and save Earth from destruction. Owing to a series of unfortunate events, the Subs end up with the Inferior Five instead, and the Five’s eternal dumb luck, plus Dumb Bunny’s intellect (!) saves the day: “You have to be pretty smart to act as dumb as I do, you know!” Michael Straczynski and Jesus Saiz, to everyone’s astonishment, ‘got’ the Five. Who’d have thought?

There have been other appearances by the Inferior Five, but none worth dignifying with inclusion – either fleeting cameos, or reboots or retrofits, missing the point and the appeal of the team entirely.

But what made the Five distinctive? The quality of the creators, sure. The comedy, absolutely. But the keynote of the Five’s appeal was their paradoxical courage in the face of all obstacles. They, more than anyone else, were aware of their deficiencies, but they pulled on their big-boy pants and went out to fight the forces of evil anyway, despite the looming spectre of almost certain defeat. They pooled their meagre talents and achieved something greater than themselves. And the lack of self-awareness in the later issues, when the Five seemed to be ignorant of their own drawbacks, may be where the strip lost its heart, and consequently its uniqueness. But when the strip was at its peak, it remains unique, a parody with a soul.