In early 1961, Stan Lee was reputedly asked by his publisher, Martin Goodman, to produce a comic book similar to DC’s Justice League of America, a team formed of DC’s major superhero characters, which was going great guns on the nation’s newsstands. Trouble was, Lee’s company – not then known at that point as Marvel Comics – didn’t have any major superhero characters. They had had, back in the 1940s and 1950s, but even their biggest stars – Captain America, the Sub-Mariner and the Human Torch – had been cancelled twice each, and Lee was reluctant to revisit the well for a third attempt. Instead he reinvented the superhero format, creating a dysfunctional family, the Fantastic Four, and, battening on to their success, more hits followed – Spider-Man, Iron Man, Thor – so that, a couple of years later, Lee was in a position to create a team of his major heroes, a true equivalent to DC’s Justice League.

The Avengers, launched in 1963, teamed up Iron Man, Thor, the Hulk and Ant-Man & the Wasp, each of whom was the star of their own solo series. Replacing the early-departing Hulk, whose first run was a surprising flop for Marvel, was Captain America in issue #4, reintroducing the Golden Age hero and giving him a ‘Man Out Of Time’ vibe which resonated with the readership more strongly than a straight revival would have. This stellar team had several epic adventures, and seemed set confidently to rival the JLA in sales and power – but then, with #16, Lee moved the goalposts yet again! 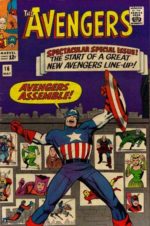 In issue #16, entitled ‘The Old Order Changeth’, Lee sacked four-fifths of the team;  it’s easy to see why: Hank & Jan were written out – their strip in Tales to Astonish, having been bitten by a radioactive sales report, was about to be cancelled. But Thor and Iron Man were huge hits, so perhaps Lee (at that stage writing everything, rather than the multiple author & editor set-up over at DC) wanted to focus more on their solo adventures without the distraction of their involvement in the Avengers. In any event, Thor, Iron Man, Giant-Man and the Wasp were replaced by three reformed villains – Hawkeye, who had battled Iron Man on numerous occasions, and Quicksilver & the Scarlet Witch, sibling enemies of the X-Men. It was a ballsy move in story context; Hawkeye was a known thief and Petro and Wanda, recently members in good standing of the Brotherhood of Evil Mutants, were terrorists owing to their association with Magneto. Would the readers accept them as heroes?

It was also a daring move commercially; Iron Man and Thor’s presence would have been a huge ‘crossover’ draw to readers. Replacing them with three virtual unknowns – mentored by the remaining Captain America, whose solo feature in Tales of Suspense was less than a year old, and still unproven – could have resulted in the title’s swift demise. Instead, it provided a more intimate dynamic. Freed from the concern of having to co-ordinate the Avenging activities with the solo series, Lee could concentrate more on the character interplay which was his strength. ‘Cap’s Kookie Quartet’ became a faux family a la the Fantastic Four, bickering but loyal to each other, with Hawkeye and Quicksilver butting heads to be the young alpha of the pack, while gradually, in tiny stages, the Scarlet Witch emerged from her brother’s shadow, growing in power and confidence. 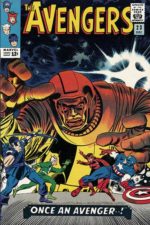 There were flaws, of course; Hawkeye’s constant Johnny-One-Note abrasiveness, ameliorated only occasionally, could become annoying when read in large doses, and Quicksilver’s arrogance begged to be punctured (as well as his inability to address his sister Wanda without adding the explanatory suffix ‘my sister’ – as if either of them was likely to forget that fact! (Granted, Marvel did, but that was decades later…)). And while the Scarlet Witch did come forward during this time, the statement has to be qualified by the observation that it was the early 1960s, and ‘baby steps’ were the order of the day. There were glimpses of her potentially devastating powers, but sadly most of the time, it was still a man telling her when and how to use them. That being said, her effortless takedown in issue #18 of a villain who had defeated all her male colleagues was gratifying.

Above it all, there was the guiding presence of Captain America, shown not as the gung-ho patriot of his vintage  iteration, but as a parental figure, training his protégés, but also evidently caring for them. A man cut away from his own era, the younger Avengers became Cap’s surrogate for the family he might otherwise have had in a kinder world, and it’s a tribute to Lee’s skill as a writer that Cap’s unspoken parental love (tempered with impatience!) for his charges shone through. 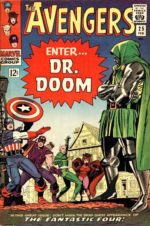 This team’s first objective was to locate and recruit the Hulk, as, lacking the raw power of Thor, Iron Man and Giant-Man, they felt somewhat challenged. But their skills and powers, plus instinctive teamwork, proved more than sufficient to their goals, and the idea of Hulk-wrangling was abandoned by the newly-confident quartet. Together, they faced down some of the Avengers’ greatest enemies: the Enchantress and the Executioner, the villain first known as Power Man, traitorous new recruit the Swordsman, time-travelling tyrant Kang, and the Marvel Universe’ ‘Biggest Bad’, Doctor Doom! 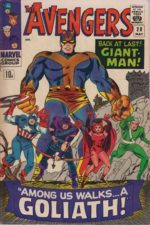 Stan became a little restless with a ‘second FF’, however, and by issue #26, he began expanding the roster; in that issue, Janet Van Dyne, the Wasp, sought the Avengers’ help, and her size-changing sweetheart followed along soon after, under a new nom du guerre of Goliath. Both rejoined the team, and the cast of characters was expanded further after Roy Thomas took over the scripting with the addition of Hercules, on one of those temporary exiles from paradise that comic-book gods are so fond of. Brash and overwhelming, but benign, Herc filled the ‘raw power’ requirement admirably, while maintaining the focus on interpersonal relationships. And ‘Cap’s Kookie Quartet’ became an effective octet with the increasing involvement of the Black Widow, who had graduated from Iron Man’s femme fatale to Hawkeye’s romantic interest. A bad girl gone good, Natasha’s shadowed past amped up the drama and angst even as she fought alongside the team – her non-Avenger status proving pivotal to the group’s survival at one point. This mix of characters, tensions, and romantic subplots kept the audience enthralled and the sales up without the ‘star power’ of the marquee names.

Sadly, it didn’t endure. Roy Thomas decided to shake matters up in a major way, and with issue #47, Quicksilver and the Scarlet Witch were forcibly recruited by Magneto again – with a head injury to Wanda subsequently rendering her powerless and amnesiac for a tedious subplot. Other characters were introduced in rapid succession – the heroic version of the Black Knight, the Black Panther, the Vision –  as the Avengers changed once more, from an intimate ensemble cast with a ‘chosen family’ feel to an association of like-minded colleagues with common goals.

There were many cracking issues in the title’s future, the quality not significantly diminishing until past #100, but the unique dynamic established in #16, while sustainable through cautious expansion, didn’t survive the free for all come’n’go which began with #47.