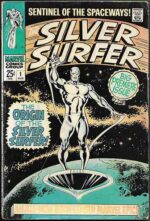 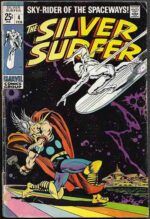 *Marvel: It’s been a little while since we’ve had these most coveted issues of the Silver Surfer (1st series 1968) through our hands. And while you won’t find the grades and conditions of these copies exciting, you should like the prices… Following his debut in Fantastic Four #48, Norrin Radd, Herald of Galactus, gained popularity as a recurring guest star, and his status was confirmed when Marvel launched the Silver Surfer’s own series in the double-sized format in 1968. This premier issue featured, for the first time, John Buscema’s illustrations on the Surfer, a body of work generally acknowledged to be among his finest, and presented also for the first time a 38 page account of the Surfer’s origins, plus (in the back) a 13 page tale of the Watcher, detailing the reasons behind the Watcher’s oath of non-interference. Issue #4, with its iconic cover featured the Surfer encountering Thor, Loki and co in an adventure in Asgard; the Asgardians have never looked better. The first run of the Surfer’s solo series has achieved cult status, with the early double-sized issues in particular being keenly sought out. #1 sadly suffers from a faded cover and a front spine split half way along from the bottom; remarkably it still retains some cover gloss! The page quality is quite decent and it’s also a cents copy. #4, a pence stamped copy, has vibrant cover colour with some gloss and good off-white pages; the spine is split about 3/4 of its length from the bottom, where a narrow piece of tape has been used which is no longer functioning; some edge wear and creasing, but the cover image is largely unmarred. So, non-beautiful copies of beautiful comics but great gap-fillers if you’re on a budget.
PICTURED: SILVER SURFER BOTH SOLD
#1 FA £110
#4 FA/GD p £115