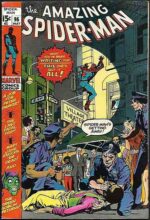 *Marvel: What’s Old is our feature where we highlight stuff from our catalogue that you may have missed. Stan Lee decided to feature a drugs plot in Amazing Spider-Man #96, the first part of the Green Goblin trilogy when Norman Osborn remembers his sinister alter ego. This meant the Comics Code Authority seal was not used on this issue. There’s a whole load of interaction between Peter Parker’s growing cast and a story with a social conscience, culminating with a showdown with the Goblin and ‘continued next issue’. The art by Kane and Romita don’t hurt none, either. This superior cents copy is flat, tight and glossy with a clear and colourful cover image. The staples are tight and the pages off-white to white. Just some minor stress marks to the spine and miniscule bits of wear at the top and bottom left corners stop it grading higher.
PICTURED: AMAZING SPIDER-MAN #96 VF- £105